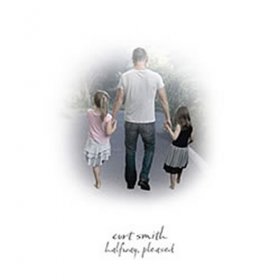 Curt Smith’s latest solo release "Halfway, pleased," is a semi-autobiographical album about his relationships with his children, parents and friends. "The title refers to where I find myself at this moment,” he says. “Making the transition from my carefree thirties into the responsibility of being a father; from the need to protest into the desire to protect.” The album offers up 15 reflective tracks, including the sensual single “Seven of Sundays,” the lush harmonies of “Greatest Divide,” the compelling progression of “Two,” and the mesmerizing rhythms of “Addict,” as well as four bonus tracks.

In addition to joining the ranks of major artists releasing their work independently under their own banners, Smith is issuing “Halfway, pleased” under a Creative Commons license, which gives fans the right to copy, distribute and perform the album’s songs, so long as the uses are non-commercial and properly attributed to Smith. “Nothing would make me happier,” he insists, “than for my music to be heard by as many people as possible. If people like the album and its songs enough to put it on their website or share it with their friends, that's fantastic. I only ask that they not exploit my music in any way that generates revenue for them but not for me. Because at the end of the day,” he points out, “artists need to realize an income from their art... or they'll have to stop making art in order to do something else to keep a roof over their heads."

Smith began writing “Halfway, pleased” in 2001, but put the project on hold when after 9 years of silence he reconnected with his Tears for Fears partner Roland Orzabal. That led to an unexpected reunion, the critically acclaimed 2005 Tears for Fears album “Everybody Loves A Happy ending,” and a successful worldwide tour. Finally, in 2006 with that behind him, he resumed work on and finished ”Halfway, pleased.”

This very personal album reflects, obliquely, on his journey and life experiences (so far). “I prefer writing slightly cryptic lyrics,” he confides, “that take some thought, and rely on the things that are left unsaid but hinted at.” Even the title is autobiographical; “I figure I’m about halfway through life, and I’m quite pleased.”